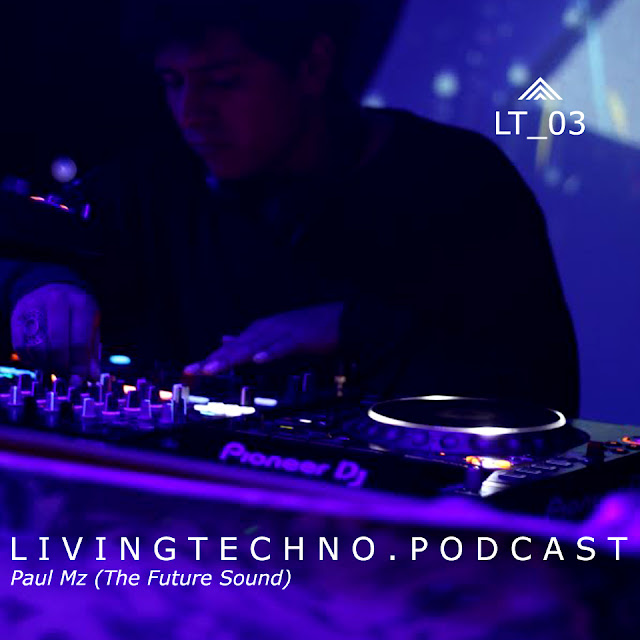 
Episode 3 of the renovated Living Techno Podcast is here. This time featuring Paul Mz, a guatemalan Dj & Promoter of the collective “The Future Sound”.

His presentations are characterized by his Dark, Mystic & sophisticated music. Sessions full of progressive spiritual dramatic vibes with a dynamic rhythm.

For this chapter he is sharing a one hour mix dropping some Hard Techno with Trance grooves and dark sounds that really goes well together.

Biography. Guatemalan Dj & promoter of the collective “The Future Sound”.
This new talent on the Guatemalan scene begins his journey in music from an early age when he decides to learn to play the piano. His first musical influences were Rock and Soul which makes him passionate about intense music with strong emotions.
His Love for music forced him to always seek new auditive experiences, which led him to discover the Underground Electronic Music scene. After years of being part of this Scene just as an assistant of the events, he decided to become a Dj. at first just playing at private parties for friends and then throwing his own parties with his best friend at the club “El Inmaculado Orden Secreto Bar” which were called “Noches De Ritual”.
After that on 2019 he Joins The Future Sound, one of the best promoter collectives of the Country, and it is in that moment that he starts getting his first gigs at some of the best clubs in Central America like "The Secret Garden", "The Box Lounge Groove", "Pausa", "707" (El Salvador), etc. And also he starts promoting bigger events like Hecho En Guate, Cyber Punks, Agents Of Kaos, Santeria Noches De Ritual, Mladen Tomic, Alexi Delano and many others.
His presentations are characterized by his Dark, Mystic & sophisticated music. Sets full of progressive spiritual dramatic vibes with a dynamic rhythm. His predilect genre to play is Techno but he is also a big fan of house and classic trance.
His influences are
Stan Kolev, Inhalt Der Nacht, Milo Spykers, ArtBat, Pan-Pot, JoyHouser, Alex Under, Kasst, Miss Monique, Cosmic Boys, Amelie Lens, Russen Mafia, Tony rohr, Xpansul, Alexi Delano, OC & Verde, Luciano,  Cari Lekebusch, Roberto Capuano, Joseph Capriati, Kevin Sounderson, Ellen Alien, Alex Mine, etc.