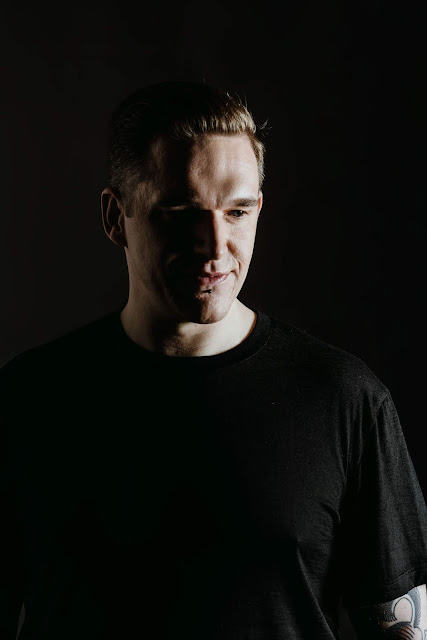 Originally from Essex and now based in London, Jay’s ﬁrst love was drum’n’bass, avidly collecting records from labels like Metalheadz, Renegade Hardware, Soul:R, V Recordings, Moving Shadow, ReinfoJayrced and more. In his teens he was locking in to pirate stations religiously, visiting record shops, fantasising about attending his ﬁrst rave and mixing in his bedroom on a pair of belt-drive turntables. It’s a well-trodden path that laid the foundations for Jay’s current trajectory.

By 2004 he’d discovered techno through Jeﬀ Mills’ classic release ‘The Exhibitionist’. That same year he visited fabric for the ﬁrst time and read an article, in cult drum’n’bass magazine Knowledge, that joined the dots between DnB and techno - it was a moment of enlightenment that changed the course of his life. Jay’s fate was sealed, he was hooked and soon began delving into the big wide world of techno, developing a strong aﬃnity with the UK sound; artists like Dave Clarke, Oliver Ho, James Ruskin, Surgeon, Luke Slater, Ben Sims, ø [Phase], and Steve Bicknell inspiring his newfound love for techno, along with heads like Jeﬀ Mills, Robert Hood, Derrick May, The Advent, Joey Beltram, Pacou, Echoplex, Ritzi Lee, Ben Klock, DVS1 and many more.

In 2008 he spent a few years in Cambridge, where he played his ﬁrst techno gigs, picking up bookings at a local techno night called The Priory and playing at illegal warehouse parties on the outskirts of the city. In 2011 he made the move to London, immersing himself in the capital’s lively scene. Jay became a resident at VOID, appearing at both Public Life and Cafe 1001. London provided the base from which he has built his career in techno; it’s the place where he ﬁrst heard the music played live, it’s where he bonded with like-minded music lovers and it’s where he is now resident at the city’s most inﬂuential club, fabric.

Despite all of this, Jay attempted to live a ‘normal life’ by enrolling at university, Jay realised that music was his true calling. During his ﬁnal year at uni he opened Ableton for the ﬁrst time, which was akin to opening Pandora’s Box, setting him on a path of discovery that has ampliﬁed his love for music ten-fold. Captivated by the endless world of possibilities presented by music production, Jay has immersed himself in the studio; constantly learning, watching tutorials, taking advice from his peers, experimenting and enjoying the creative process immensely.

He completed his ﬁrst track in 2010 but many more were to come before he dropped his debut release, the ‘First Flight’ EP on his own label Blackaxon in 2014.  In 2015 he followed up with the ‘Entitas’ EP, which featured ‘Entity’, a track that captured the imaginations of techno lovers all over the world and introduced Jay to his heroes and peers alike. In typical Jay Clarke style, he sat with the engineer, Matt Colton, as the EP was being mastered, observing intently and absorbing everything he could about the process. It’s this level of care and attention that makes him one of the most exciting artists of his generation; soaking up all the knowledge he can in order to reﬁne his own skills and produce the best music he can.

One of Jay’s biggest milestones so far came in 2016 when he had an EP signed to Klockworks, Ben Klock’s highly-respected label. Klockworks 18 featured three tracks that all showcased Clarke’s ability to craft groovy, dynamic techno that captivates dance ﬂoors. Taking familiar techno tropes and stamping his own identity on them, the EP was well-received across the board and helped to establish Jay as a formidable producer.

This has fed back into his DJ career and, in 2018 alone, he played at some of the best-known clubs in the world including Berghain (Berlin), fabric (London), Gashouder (Amsterdam), Shelter (Amsterdam) and festivals such as Junction 2 (London), ADE (Amsterdam) and Balaton Sound (Hungary). Each performance rooted in his desire to entertain and introduce audiences to new sounds, each one a learning experience that has added to his repertoire.

Since then he has taken it very steady, maintaining a measured approach to his release schedule, preferring to be patient rather than ﬂood the already saturated market with his music. Releases with Dense & Pika’s Kneaded Pains and his own Blackaxon are due in the coming months, with plenty more material being cooked up in his lab. Years of experimentation have given Jay a conﬁdence in his music that allows for this mature, patient approach inspired by artists he admires.  For Jay it’s about longevity and contributing to a scene that has inspired him since 2004.

Positive, hard-working and a gifted DJ and producer, Jay Clarke’s determination and unwavering passion for learning put him in a class of his own.

With the support of industry heavyweights like fabric and Ben Klock he is carving out his own path and inspiring a whole new generation of techno artists to get busy. The future of UK techno is in safe hands...

Read something about Jay Clarke