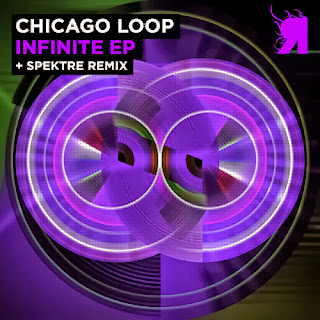 We have not heard much about Chicago Loop, however he is a DJ and producer from the UK who has-been on the techno scene Involved for 2 decades, playing and releasing worldwide Hundreds of tracks under various guises. Definitely an interesting fact for techno lovers.

After listening to his recent release under Chicago Loop, "The Infinite EP is based on a concept of dark rave modernised for the present day market. Instead of re-using the old acid sound over again, Chicago Loop has decided to rework the sound of the synths and fuse them with modern and heavy techno beats, taking the Infinite EP to another level." The EP is already OUT under Respekt Recordings and you can get it on Beatport, Here's a short Review of this great EP features 2 tracks including a remix by Spektre.

Ascari (Original Mix); is a track with a lot of energy, definitely highlights its heavy techno style surrounded by loud sounds and a very strong ambient, the beat go really fast and the energy of the track really wake up your soul and body and gave them some breaths, Meanwhile Ascari (Spektre Remix), gets more deeper and the sound get a darker touch that give the track a plus. And the last track What is Music (Original Mix) starts with a very nice techno atmosphere, very speed, and suddently the background gets corrupted with dark sounds and the track gets more heavier, featuring tripy vocals this track contains everything to hit the dancefloor.