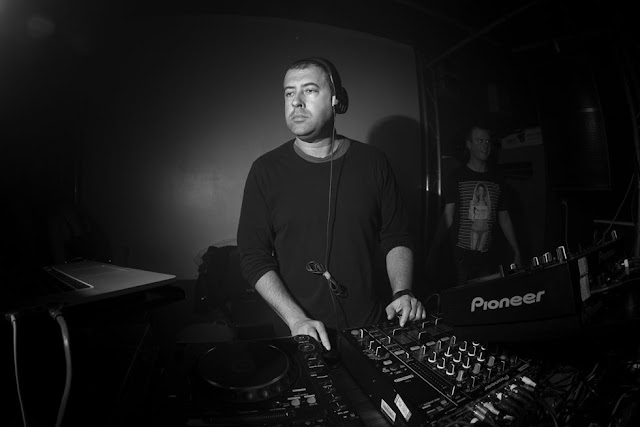 Something about Dave Clarke:
When his parents split, he ran away from home, sleeping rough in car-parks before a friend offered him floor-space. The only thing that kept him going was music. From soul to the Psychedelic Furs, from Devo to the nascent Chicago house sound, Clarke devoured it all voraciously and blagged himself a DJ slot in Brighton. Soon such gigs provided Clarke with a meagre living, then in 1994 his reputation was sealed by a series of EPs known collectively as ‘Red’. The debut album ‘Archive 1’ followed, flecked with hints of breakbeat and electronica, a novelty in the puritanical techno scene of the time.

His mix CDs included the two best-selling ‘World Service’ outings (one of which made it into the top ten of best mix compilations of the 00's in Resident Advisor) which showcased his dual love for electro and techno, and he briefly signed to Skint Records, resulting in 2004’s ‘Devils Advocate’ album, a long-player jammed with dark techno energy but laced with hip hop beats. When his production pace ebbed Music Man Records gathered together ‘Remixes And Rareties’ in 2007, making Album Of The Month in Mixmag and receiving critical plaudits all over. There is, however, no denying things eventually went quiet on the production front.
Clarke greets this with a dramatic pause. “If I’d stepped into a studio then I could have done what I’d already done but I didn’t want to do that, I want to do something I haven’t done.” He pauses again before going on. “I think it’ll happen,” he allows, “I’m not going to leave it forever...”
In the meantime he has plenty else on. Moving finally from rural sedate Sussex to Amsterdam revitalized him.
“I felt quite excluded when I lived in the countryside,” he admits, “whereas my home in Amsterdam is a fifteen minute walk from most venues so I’ve seen Patti Smith, Queens Of The Stone Age, The Horrors, Holy Fuck!. There’s no excuse not to go so that’s very inspiring.”
He’s also built up his White Noise radio show on the Dutch station 3FM (also archived at the award-winning http://3voor12.vpro.nl), interviewing artists ranging from John Foxx to Coldcut to Broken Social Scene but the thrust of the show is still to cast light on exciting new music.
“The most important point is to air music that other stations and DJs don’t have the power to,” he says, “music that wouldn’t normally be given a chance. I can just go where I want with it although it’s still 99% techno and electro.”
The same applies to his White Noise label. Emphatically not a vanity project for his own releases, it has instead hosted boutique vinyl pressings (alongside the usual digital fare) for gleaming new material by artists such as Frank Kusserov, Noirdegout, Woody McBride, Marco Bernadi, Terence Fixmer and The Hacker. These and other tunes will be chopped, hammered, filleted and turned on their heads during Clarke’s DJ sets. That’s where he comes alive, where skills honed for years blow venues apart. A 2009 highlight, for instance, was the fifteenth birthday party of FUSE, the Brussels club where his standing is second-to-none, where he’s developed an extraordinary relationship with the crowd. He speaks of it with his breath catching, as thrilled as ever by the ride the music takes him on.