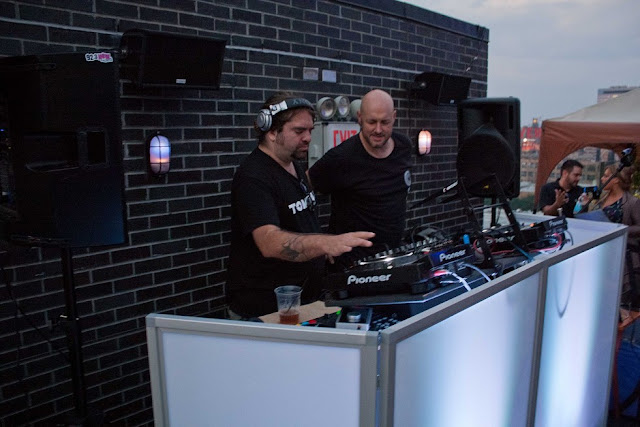 Pig & Dan aka Igor Tchkotoua and Dan Duncan seem to be the new kids in the underground. However the experience of this duo stretches back to the beginning of the dance music scene. This was only possible because of their work in major recording studio’s making tea for the famous and learning about engineering and producing pop records.
In those days there were no home studios like there are today plus a very limited selection of synthesizers or electronic equipment to sequence with. They both used the time when nobody was working in the studio’s to start to experiment using the primitive technology that was available to them.
In 1990 Dan followed through with a new vibe and became part of one of the most influential drum&bass artists known in the genres history ¨Intense¨. He played both live and behind the decks with the likes of LTJ Bukem, Fabio and Grooverider all over the globe. He was then responsible for hitting the mainstream after signing a big deal with Sony records, but still maintained the sound that was considered deep underground.
In 1999 Igor met Dan on a flight to Spain and began a partnership that has now risen to a point of recognition worldwide. Their mixture of influences has given them a sound, which is easily recognizable and seems to be loved by the masses.
Almost immediately the likes of Sander Kleinenburg and Anthony Pappa were including
them on their massive selling mix CD´s and other mainstream DJ´s such as Laurent Garnier and Deep Dish were including many of their tracks in their summer sessions.
After over twenty releases on their well-respected label 'Submission' Pig&Dan felt it was time to take a turn and go back their more electronic roots. They opened a new label ¨Sonic Society¨ which is now being hailed as one of the it labels in the club scene, plus has the likes of Sven Vath, Loco Dice and Mandy supporting the duo in a big way. Due to the support of the more tech side of the scene Pig&Dan have now released with Cocoon both on vinyl and CD and have been remixing for the likes of most respected Underworld and Oliver Koletzki to name a few.
Also their work behind the decks has exploded in such a way that it seems that they are going to be one of the most popular choices for the summer of 2006. They are the only DJ´s that have been invited to play in Cocoon club after being part of the much acclaimed night ¨next generation¨ and have been booked to play around the globe from London to Buenos Aires.
Both as artists and DJ´s Pig&Dan are set to put the smiley face back into the dance industry. They’re on mission to help us have our good night out, and take us back to the vibe that was only found in previous years. ¨Its time to make people in the club scene have fun again. We all love a dark tune, but there’s enough darkness out there so lets get together and create some good memories¨ (Pig&Dan)