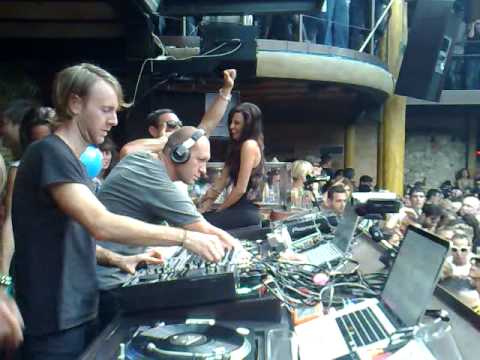 Richie Hawtin created a unique techno sound, which is regarded as synonymous with the city of Detroit. That sound, electro house, is very minimal, yet highly danceable. He is known for his use of the Roland TB-303 bass machine and that sound has become inseparable from quality acid house and electro recordings. These days, Hawtin kicks around with a TR-909 drum machine. Hawtin signed a record deal with Nova Mute in 1993, and is considered a star in Europe, where he has enjoyed success with his project, Plastikman.
In 1994, rumor has it that Hawtin was scheduled to perform at a rave held inside the Brooklyn Bridge. Allegedly, while crossing the border from Canada, guards stopped him, assuming he was attempting to work illegally in the US due to the massive amount of equipment in his car. Supposedly he went home and recorded a set to DAT and shipped it to the promoters. To this day, no one can say for certain whether that headlining slot was live or on tape.
Today, he has gained the respect of a larger US audience. In May 2000, Hawtin performed at the first Detroit Electronic Festival alongside Derrick May, Juan Atkins and other techno masterminds. More than 200,000 people attended from all over the world.

Marco Carola is a global ambassador of techno. From Napoli in the south of Italy, Marco was instrumental in the development of the electronic scene in the early 90s, he took the flourishing techno Neapolitan scene to the rest of the world. Over twenty years later and Marco is still one of the most respected artists amongst the techno scene, widely regarded as one of the key factors in driving the genre towards worldwide recognition within electronic music.
As a revered producer and successful label head, Marco has spearheaded imprints such as Design Music, Zenit, Question, One Thousands and Do.Mi.No whilst releasing music on a selection of the world’s finest labels such as Minus, Plus 8 2M and Primate Recordings. In addition to five critically acclaimed albums, including his most recent Play It Loud, Marco has also been responsible for a clutch of seminal mix compilations. In 2006, his mix for legendary London club Fabric’s series was a lesson in sleek, future-facing minimalism. That was followed up by well received compilations for Time Warp in 2009. In 2010 Cocoon label boss Sven Väth asked him to mix the Frankfurt based label’s Party Animals CD alongside Nick Curly, which took Carola's dj taste and skills to new heights.
Famed for his energetic and impressive three-deck style of mixing and long journey set, Marco has remained one of the most in demand DJs on the planet throughout the last two decades. Favoring mammoth eight hour plus sets, Marco is predisposed to a subtle working of the crowd that has made him a favorite among fans from Ibiza to New York, South America and beyond.