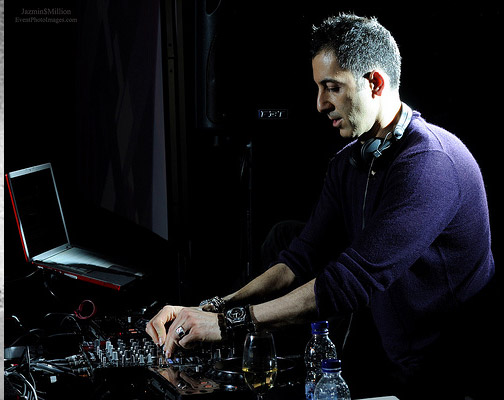 Dubfire’s “jet-black, polished-chrome techno” of 2009 harnesses three and a half years of upward momentum, highlighted by notable productions and remixes landing at the top of "best of" charts and set lists the world over. 2009’s "Split the Line [Dubfire Mega Remix]," an alchemic symbiosis of Paul Ritch’s "Split" and "Walk the Line," best exemplifies the dark and evocative sound Dubfire has cultivated since embarking on his solo journey.
In 2006 - after 15 ground-breaking years topping charts, winning Grammys, and earning acclaim as one-half of legendary electronic partnership Deep Dish - Dubfire returned to his roots: a diverse foundation spanning punk, industrial/new wave, jazz, dub, hip-hop, house and techno. "I Feel Speed," his first solo release, is a remake of the classic Love and Rockets track with Dubfire himself on vocals. It marked a musical crossroads in his passage towards a deeper and darker sound. As Dubfire's productions delved into techno's moodier, sonically edgy dimensions, critics and fans alike celebrated the new direction with admiration and enthusiasm.
An avalanche of accolades made tracks like "Roadkill" and "RibCage" instant techno classics upon release. Covers on Raveline, DJ Magazine and countless other respected music journals; an invitation to mix the covermount CD for Mixmag and DJ; an Essential Mix for the UK's Radio One; and glowing write-ups from Beatportal and Resident Advisor are just a small taste of the universal acclaim and rave reception. A barrage of remixes and productions on respected labels—including Cocoon, Get Physical, Minus, and Rekids—inspired the electronic dance music world, earning Dubfire praise from both DJs and producers as "the DJ’s DJ" as well as top to bottom praise from a myriad of online and offline music critics and fans.
By the end of 2007, Dubfire cemented his standing among the most forward-thinking artists with a slew of notable honors, including two Top 10 placements on Resident Advisor's "100 Most Charted Records of 2007" and the DJ Award for "Best Tech House DJ." At the 2008 Beatport Awards, fans singled out Dubfire as both "Best Minimal Artist" and "Best Techno Artist" - the latter a prized honor he would earn once again in 2009. Other celebrated industry nods in 2008 include the IDJ "Player of the Year" Award and "Best Remix" awards - for the dark anthem "Grindhouse [Dubfire Terror Planet Mix]" - from both Groove Magazine and Raveline Magazine. Dubfire also graced Raveline Magazine's "Top 10 International DJs" and "Top 10 Producers" polls in 2008.
Envisioning a launching pad for his own productions while nurturing fresh talent worldwide, Dubfire took another bold leap forward, launching his own label, Science + Technology Digital Audio. SCI+TEC rapidly built a die-hard fan base thanks to well-received tracks by innovative new players like Delete, Paul Ritch, Rocha & Lewinger, and The Dolphins. In March 2009, Dubfire presented his sonic vision for SCI+TEC with a DJ Mag covermount titled "Past, Present, and Future," revealing a personal mix of SCI+TEC's best and brightest. To date, the label's roster proudly encompasses a powerful mix of marquee players and hungry newcomers.
A thriving production partnership with techno maestro Oliver Huntemann was born in 2008 and continues into 2009 with a host of productions sure to bring the electronic dance scene to its knees with each release. Initially collaborating with an ocean between them, the duo released two massive dance floor hits: "Diablo" and "Dios." Anticipation for the Fall 2009 release of "Fuego" - the third installment of this powerhouse alliance - is at fever pitch.
As his productions and remixes garnered massive popularity - 8 are listed on Beatport’s "Best of DJ Charts, 2009" - Dubfire's goodwill among critics and fans steamrolled into 2009 unabated. "Split the Line" remains one of Beatport's top sellers. "Ten Years Cocoon Ibiza," a two-disc compilation [co-mixed with Loco Dice] met with further rapturous reception, further whetting fans' fervent appetites for the appropriately titled "Rabid," which was released in September.
Amongst his contemporaries, Dubfire remains a unique DJ, producer, and remixer - eager to hone and further evolve his signature sound. With an unmatched hunger to conquer the latest frontiers in electronic dance music and its rapidly changing technology, Dubfire delivers the unexpected and has no intention of slowing down.