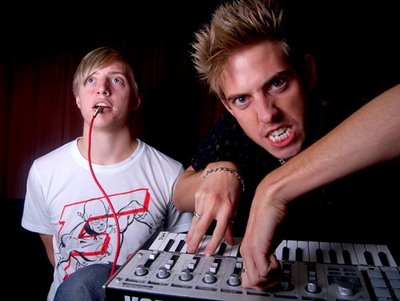 SPEKTRE weaves an intrepid, complex web amongst underground dance music’s elite. The techno brainchild of DJs/producers Filthy Rich and Paul Maddox, the dark duo was formed through a shared passion for driving electronic music and a mutual desire to push sound boundaries using the most cutting edge technology available. The fusion of their combined experience in the studio allows them to construct dark, sinister sounds mixed with twisted, haunting vocals and unnerving, atmospheric foundations.

Always innovative, their sinful sound draws inspiration from early looping detroit techno from the likes of Joey Beltram and R&S releases, combined with an amalgamation of much more recent production masterminds such as Dubfire, Martin Buttrich, Trentemoller and Stephan Bodzin. High rulers in the underground scene, their live shows feature rave-inspired, melodic, razor-sharp beats and their menacing releases hold the key to packing out hot, sweaty, dance floors every weekend.

Spektre’s web is a permanent fixture nestling snugly in the corner of the studio. As producers they more often than not hover comfortably in Beatport’s top 10 listings, with their tracks being released on prestigious labels such as Yoshitoshi, Great Stuff, Dekadent Schallplatten, Dance Electic, 303 Lovers and Weave, plus remixes on Craft, Audio Therapy, John Henry and Spectrum amongst a whole host of others. In addition, their tracks have featured on Renaissance and Umek compilations and their ‘Live At Glade Festival’ album was released via VeryVeryVeryWrongIndeed in 2009. Spektre’s production is supported by some of techno’s biggest pioneers including Carl Cox, Sven Vath, Richie Hawtin, Dubfire and James Zabiela. They have had recent features in Mixmag, DJ and IDJ magazines, with DJ mag dubbing them “the home-grown producers, tipped to give Berlin’s minimal crowd a run for their money.”

The newest silk thread to be concocted and brought into Spektre’s web is the highly anticipated and awaited launch of their ‘Respekt’ imprint. A fresh and exciting new label concept that will serve as a platform for exclusive Spektre productions as well as a breeding ground for upcoming talent. With two single releases on the horizon before the year’s end, the tracks see Spektre collaborating with Matt Cooper on ‘Cuenos Cubanos’. Following this will be their solo ‘From The Deep EP’ and their first studio album will finally drop in Spring 2010 and is guaranteed to awaken the senses of any credible music lover.

As they carefully weave their way, carving out a name as leaders of dance music’s underground pack, the gruesome twosome promise unrivalled aural delights in the coming months and, as they say “EXPEKT THE UNEXSPEKTED”