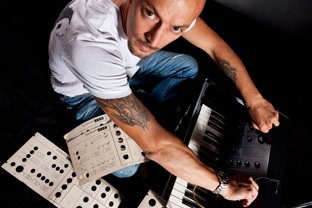 Rino Cerrone was born in Naples in 1972. His spirit of adventure already brought him in a youth age to take part to the national motorcycle competitions, getting good results. But evidently his objectives went beyond of the motorcycling and his passion for music immediately grew up. It was in fact at the end of the Eighties that Rino started to get in touch with musical reality that contributed to the formation of his actual style. In the adolescent
age he participated to the punk and rock concerts around Italy, and he started to draw near to the underground scene of squatters and illegal parties. He was fascinated then by new sonorities proposed by groups as Orb and Future Sound of London, whose dreamy and chill out atmospheres immediately, captured his attention, and they increased his curiosity toward electronic music.
From Psychic Warriors of Gaia to Zoom records, from Autechre to Richie Hawtin, Rino lived the first ‘90s in their best mystical-creative fervour. Naples shows itself careful to the new international ferments. Paul Daley, Darren Emerson, Derrick May, Dave Clarke, and lots of other, already played at least one time in his city. A chasing thirst of rhythmical weavings and sonorical daps became inevitable. Rino lives the pioneering parties by Ivan & Susy, and
frequents the after hours from Space Race, soon becoming resident DJ.
Intrigued in the productive element of dance music, he purchases in 1995 a second hand Juno 106, starting the construction of what is actually his recording studio. A significant experience in the Q-Men group makes his début
in 1997, with the publication of the first record X phase up, on Marco Carole’s Design Music. Soon after Speaker Attack, Phont Music, Relentless and Primate follow. In 1999 ho registers his own label Rilis records, whom first two numbers made it one of the most prestigious labels in the world techno panorama.
In 2001 he releases excellent ep as Back To The Basics, (Genetic); Convert Filter, (Terminal M); Reset ep, (SAW Recordings), Symmetric ep (Zenit). Between 2002 and 2004 tracks are been published on Orion, Analytic Trail, Sketch, Kombination Research. Many remix: First Step (Isoghi) Subtractive Synthesis VI Remixes, (Synewave),
Recreations (Kombinatoin Research), Contact ep (Funktion Records), Club System 2005 (Sony BGM Music Entertainment) to mention some.
The appearances on compilation and collections are several: “DE 9 Closer to the Edit”, (Minus)”, which contains together with other works by Rino the famous “Optical Way”, also present on “Relentless Beats” vol.1 e2, on “Vision”, for “Combined Forces”, and on Cristian Varela and Tony Verdi compilation “Salon de Mezclas” for “Serial Killer Vinyl”. Moreover: Yul Records; Eukatech, XXX Records, Music Man Records, Clubstar, ZYX, Subliminal, Intec,
MIXmag, Ovum.
From 1999 to 2003 Rilis produced 10 hi quality releases, which soon made it a cult label, with represses and
impressive sells. In 2004 was born the Special Edition project, a collection of the very best minimal techno tracks,
with his unmistakable style. Plus the new Rilis RMX project, born in 2005, where international artists remix the last
7 years Rilis hits. The same year a brand new label project: Loose Records. The label has the goal to produce and
promote young talents.
Rino Cerrone spins since 2000 in the world best festivals and clubs. He has played in big events such as: I Love
Techno, Innercity, Awakenings. Form Japan to South America, his schedule is always busy. His dark-funky style and
his excellent DJ sets, make him gain consent all over the world.