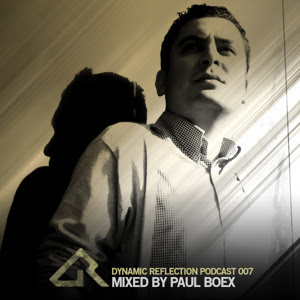 "It's the head chef of Dynamic Reflection his turn to roll the dice on another Dynamic Reflection Podcast. He made this special mix to express himself with music he truly believes in. Some of it is old, some of is new or unreleased, but the most important thing; it's quality techno!!

Expect tracks from Ness, Abstract Division, Lucy, EQD, Unbalance, DVS1 and lot's of other goodies. We'll hope enjoy this one!"

Biography of Paul Boex:
Paul Boex got’s acquainted with the sound of techno at the young age of 15 years old. From that age he discovered a whole new evolution. Nowadays, all he ever cares about is music in almost every certain way.
He has an open mind when it comes to music and puts all different influences in his music and DJ sets.
His preferences go out to the pure dynamic loop techno, influenced by the Birmingham, Detroit and Berlin sound from nowadays. In his sets he pushes himself to the edge of unexpected abilities. His sound is inspired by some of his favorite producers like Jeff Mills, Robert Hood, James Ruskin, Surgeon, Oscar Mulero, Planetary Assault Systems, Function, Dettman&Klock, Shed, Autechre and Donnacha Costello.
He’ s also the resident DJ and initiator of one of the most purest techno events of Holland, Mental Evolution, Soulfood and Transmission. Besides these concepts he’s working as the booker of Hollands most underground technoclub; Club Poema in Utrecht.

Dynamo
In 2006 Paul Boex meets Marco Rane and they started a project to emerge and combine their forces and skills to create a mixed up sound with a lot of uplifting percussion, pounding basslines and floating synths. Under the name Dynamo they form a collaboration where they both can create their own musical interests with no boundaries attached. They developed their own sound loaded with power and energetic sources which explains the name Dynamo.
These guys are developing them self on and on, with productions on well respected labels as Arms, Aftertaste Recordings, Naked Lunch and of course on Paul’s own imprint Dynamic Reflection they are breaking it down!

Dynamic Reflection
In the year 2008 he starts his own label called ‘Dynamic Reflection’, to support the pure meaning of techno. The label got a lot of respect in a short amount of time all across the globe by artists, such as Dave Clarke, Ben Sims, Surgeon, Oscar Mulero, Luke Slater, The Advent and many others.