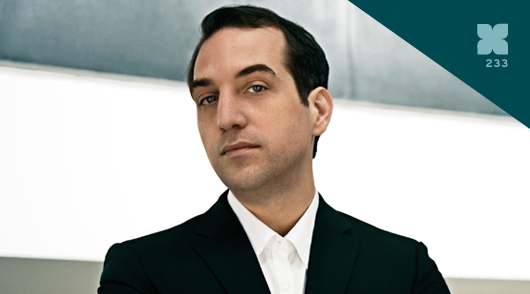 Something about Marc Houle:

Marc Houle grew up in Windsor, Canada with Detroit as his mid-90’s backyard party playground – as a kid he had a love for obscure new wave & analog synths, so it was just a matter of time before he started making music of his own. Ask any of his friends, and they’ll tell you the same: the guy is a prolific music-making-machinist, dedicated to quality, but quantity as well – with nearly 1,000 tracks to his credit (most of which are tucked away on his hard drive as super secret weapons).

Now taking the reigns alongside his A&R partners Magda & Troy Pierce, Marc Houle has resurrected their label Items & Things, breaking it free from its former Minus sub-label status. Spanning electronic genres in a variety of forms… from disco tech to experimental to techno, to bring their eclectic tastes together as an outlet for music they discover on their travels & a home for their own releases.

Marc Houle’s current sound can be described in cityscapes – somewhere between Chicago & Detroit, with a new-wave underbelly. His live performances are always diverse & genre-bending reigns supreme. No two sets are ever the same, except perhaps, their ability to impress the crowd.

He’s travelled a long way from his 1997 residency at Richie Hawtin’s club “13 Below” in Detroit, to being asked to join the legendary Minus label, now making Berlin his home & continuing to show his diverse musical roots on his upcoming productions for Items & Things. Next up: A brand new single and his second album “Undercover”, which will be released in February 2012 on the label.