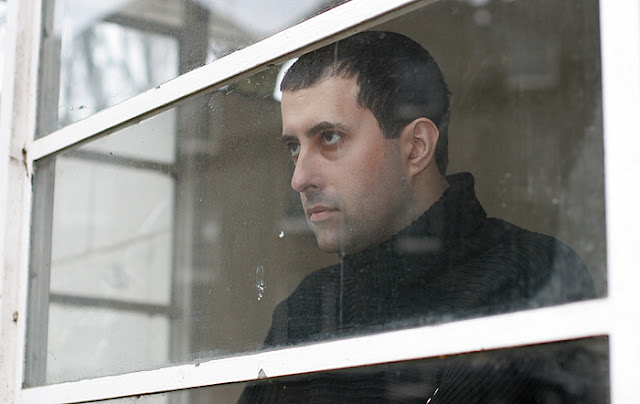 Something about Dave Clarke:

Techno pioneer Dave Clarke has always mined the edges of the mainstream for his explorations into speaker-bustin’ dance music. The one-time hip hop and soul DJ spun hip hop deep into the mix of his 1996 debut Archive One, but on his second album Devils Advocate, he’s digging even deeper.

"The heart and soul of my record, and the heart and soul of all the music I’ve ever loved is darkness and attitude," he says. Hence the flinty hip hop, filthy electro and bass-heavy post-punk that is wound around techno and house throughout the new record – released on Brighton’s Skint Records. "I was about nine years old when The Ruts and The Damned were about and I got the records. They’re still references for me now. ‘Machine Gun Etiquette’ by The Damned is still one of my favorite albums of all time. And I loved the way Bauhaus was gothy cool, not over-goth. I was very into that."

The ‘gothy cool’ of Bauhaus’s ‘She’s In Parties’ has been resurrected on a stand-out album track with some vocal assistance from Berlin’s favorite daughters, Chicks On Speed. "It’s a new song, written around the hook ‘she’s in parties’" says Dave. "And we had a great time recording it." Clarke first met the Chicks seven years ago at the infamous Ultraschall club. "I was pretending to be the doorman, people’d be coming up to me saying (mock German accent) "Ven is Dave Clarke on?" We had a few drunken nights out with DJ Hell and Upstart, drinking Cognac and bourbon, going to 80’s soul clubs and playing chess. It sounds terribly communistic, doesn’t it?"

His connection with the art-edge of electro doesn’t stop there. In 2001, Clarke released the World Service compilation, featuring a still unbeaten new-school electro tracklisting. Hacker, Fischerspooner and Adult. were all present and correct, some time before Trendy London caught on. "There were loads of compilations that came out, six, twelve, even eighteen months later, all with a very similar tracklisting. It pissed me off. At that time, there was so much exciting music coming out and it wasn’t being serviced by DJs or radio or the press." Obviously, the record-buying public agreed and they sold 70,000 copies.

So will we be seeing Dave Clarke behind the decks at art-fashion electro clubs like Nag Nag Nag soon? "I’ve got nothing to do with that scene," says Clarke. "I find it really funny that I was one of the first DJs to bring attention to this music and I’ve never been asked to play in those clubs. I prefer League of Gentlemen clubs anyway, local clubs for local people." Although he will be taking the heavy sounds of Devil’s Advocate live, debuting his set at Creamfields. "It’ll be me doing my thing, but in a punky live way.

Devil’s Advocate is an adrenalised album, cherry-picking the best of the last three decades and hammering it into a record laden with funk, groove and attitude. Take highlight ‘Dirtbox’ a totally rude boy, death-disco moment with a narcotic bassline to knock your socks off. He’s also pulled Chicago house lynchpin DJ Rush into the record, on the jack-track blastin‘ opener ‘Way Of Life’. It’s a tune that Clarke has road tested over the last twelve months, at clubs worldwide, from Portugal to Sao Paulo.

"It’s a statement of intent," he says. "I’d got so fucked off with people ripping of my Red (Clarke’s Red 1, 2 and 3 provided three of dance musics most recognisable anthems) stabs that I thought I’d rip myself off one last time. Rush came over, gave me two hours of vocals which I cut and pasted into a single song." He also corralled politicized Indie hip hop head Mr Lif onto the record. "I saw him at the ICA and thought he was great. He comes from the heart." Lif’s track, a screeching, slo-motion story of death and resurrection titled ‘Blue On Blue’ highlight’s Clarke’s hip hop roots and moves the record further away from the house and techno that Dave Clarke is best known for. "That’s another reason I called it Devil’s Advocate" explains Clarke. "The music will challenge people’s preconceptions about me. If you’re unaware of my first album or my remixes then you might think that my whole life revolves around techno. It doesn’t."

Clarke is indeed a man of many sounds but he’s undeniably an international techno ambassador of the highest degree. He’s been criss-crossing the globe every weekend for the last fifteen years playing the best in funky electronic music. "Funny enough I’ve shied away from electro in my sets at the moment," he says. "There just aren’t the records right now. I still play a lot of ghetto booty electro though. I like it. It’s filthy, it’s got a charm and it’s got the funk."

Having the funk matters. Whether it’s funk shaped like a jacking Chicago house party, or funk shaped like a post-punk b-line (Clarke’s favorite new band, incidentally, are Radio Four) it’s here. There’s even a reggae track, hidden away at the end, which was inspired by a fortuitous meeting in London’s equipment mecca, Funky Junk. "I was talking to the guy behind the counter, saying that the only reggae I could relate to was Mad Professor because it’s so precise but really laid-back. He was like ‘Have you met him? He’s standing right behind you.’

But what about the cliched version of Dave Clarke, the opinionated, cigar-chomping gourmet speeding around in fast cars? He’s still there, in the background, and, currently driving a double-glazed Mercedes S500, "for hacking up and down on motorways" which makes PJ Harvey’s Stories From The City, Stories From The Sea sound "amazing" plus a brightly colored Honda NSX. "I do smoke cigars, I do like fast cars and I do wear black, but there’s more to me than that." You want to see past the cartoon? Just take one listen to Devils Advocate and it’ll all become crystal.