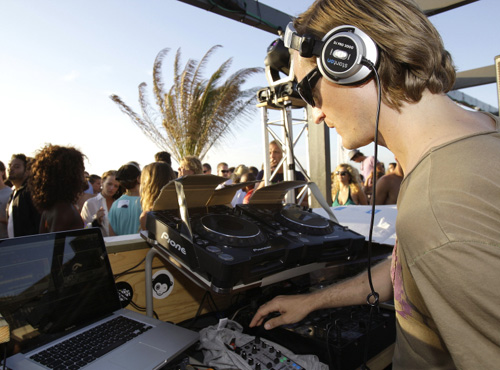 Something about Michel de Hey:

For his labels Michel has made several solo productions or releases in cooperation with Literon aka Gert-Jan Bijl, Secret cinema aka Grooveyard aka Jeroen Verheij and Mirko van Dommelen. Apart from his own labels Michel has also made music for Circle Records, Lilith Records, Artform, Lupp and Plink Plonk. Since a few years Michel also has HEY! records. On this label he only releases his own productions. The label has been supported by a whole range of dj’s from John Digweed, to Josh Wink, to Tom Middleton, to Adam Beyer. Furthermore he has had artists like Funk D ‘Void, Paul Klakbrenner, Polder, Mr G remixing tracks from the HEY! catalogue.
Furthermore, Michel is working on various compilation projects. The major ones are: the ‘Essential Elements’ series (EDM), the longest running Dutch dance compilation series since 1991, the ‘Technological Elements’ series (EDM), 'Impulz' (Influx), 'Dance Valley on Ibiza’ (Influx) and in-house compilation ‘Syntec’ (EC). Dance Valley Mainstage Edition, MDH01, 2 Faces. His latest cd offering “Recorded in Rotterdam” was highly appreciated and saw Michel supporting solely Dutch artists mixed on 1 cd. For the Amsterdam Dance Event of 2007 Michel produced ‘Recorded in Amsterdam’ where tracks from Rotterdam and Amsterdam based artists came together on one disc. And also his last mix cd, called No Nonsense, did it really well in Holland!
Not only on clubs, parties and cd’s you can listen to Michel, he also has his radioshow called HEY-Muzik. It is now broadcasted nationwide every Friday from 21.00-23.00 on Fresh Fm. The show just earned the first price for best ‘dance radio show’ of Holland this year (2009!).
If you want to tune in for a weekly update on underground minimal, tekhouse, and techno music; www.fresh.fm
But above all Michel is playing all over the world, while maintaining his status as the number 1 underground tekhouse/techno dj from Holland. He has entertained thousands and thousands of people with his unique sound. From Space Ibiza, to Indonesia, from a 4000 people Rotterdam solo beach party to the Womb in Japan, from Circo Loco at DC 10 to Creamfields, the list is endless. And without a doubt the list will grow.
In 2009 Michel has already been touring in Japan, China, Hungary, UK, Greece, Spain etc.
The next thing is his own club night, called HEY! It just started but the future already looks really bright! At the end of June Michel will go to South America where he will perform in countries like Argentine, Colombia, Peru, Paraguay and Uruguay! And also with a Ibiza gig, a lot of festivals and his own area at the Mysteryland Festival the summer will be ‘quite’ cool! To be up to date with everything check www.micheldehey.com
Artist: Michel de Hey
Tittle: Hey Muzik (Proton Radio)
Rls date:16-01-2012
Genre: Tech House
Source: WEB
Type: Set