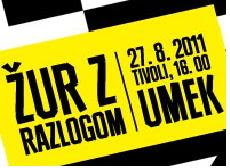 “As far as I remember, my first serious contact with music was trough pop artists such as Michael Jackson, Modern Talking, Falco and Yugoslavian singer Daniel, who rocked the Eurosong audience in the early 80’s with the infamous hit single Djuli. (Laugh.) My mother is the one to blame. She bought me my first radio which I’ve listened to ‘till exhaustion,” apologizes Uros.
He brought his music passion to the next level few years later, discovering the record button on his first double cassette player/recorder. "That enabled me to start my own music collection. I’ve recorded songs from Slovenian disco chart program, which presented top commercial tunes on weekly basis. I also managed to get my hands on some rare pirate cassettes with dance and techno tunes, but even few years after Slovenia became independent I didn’t really know where to look for that modern electronic sounds that I liked so much. I didn’t know anyone who listened to that stuff. Until I discovered Cool Night, specialized broadcast on Ljubljana’s alternative student radio station. The Monday evening slot was run by original pioneers of electronic dance culture in Slovenia, Primoz Pecovnik (now boss of indie label Matrix Music), Brane Zorman aka MC Brane of Beitthron and Aldo Ivancic of Borghesia.