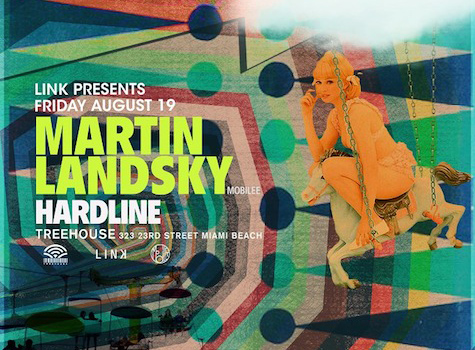 Biography of Martin Landsky:
Martin Landsky is mobilee’s longest-serving newcomer, bringing more than a decade of musicianship to his burgeoning partnership with the Berlin label.
Landsky’s extensive discography reads like a chronological guide through electronic music’s hottest sounds, and through Germany’s most vital labels; from deeply chilled dub house for his own Efforil/Intim imprint, through sampladelic disco-influenced sounds for Dessous, to his long association with Poker Flat that journeyed with him through electro experiments, driving techno, and flirtations with minimal. Whether uplifting and anthemic, dark and contemplative, or somewhere in between, Landsky’s unwillingness to be pigeonholed has taken him to the uppermost echelons of Berlin’s club scene, and higher still to a new association with mobilee records, which will see a solo release in 2011.
Landsky immersed himself in music from a young age; he grew up tinkering with cassette tape edits and breakdancing to funk and hip hop, and soon took up DJing, flexing his budding talent at school parties and local youth clubs. His discovery of acid house drew him to Hamburg’s legendary Front Club, which will eternally hold a place in Landsky‘s musical heart, having provided him an early DJ residency, and brought him together with future Poker Flat boss Steve Bug.
Impressive work on Effortil/Intim lay the groundwork for DJ appearances in key clubs like E-Werk and Tresor/Globus in Berlin, until he eventually moved to the city in1999. It was a momentous year for Landsky as he developed a deeper appreciation of house and techno. Invigorated by his new surroundings, he sought to add his own voice to Berlin’s thriving music community and founded a Poker Flat Night with Steve Bug and Clé at the Sternradio Club.
By 2000 the first Martin Landsky productions had appeared on Poker Flat, and the following year his debut longplayer In Between, cemented his position as a producer to be reckoned with. Early, heady inspirations nestled beneath the surface, and moved within his warm and future-leaning sound aesthetic. He followed the album with the cheeky Mission Upskirt EP, vocal stylings on Reject, and the classic titular tropes of Housed - all of which diversified the Martin Landsky sound and confirmed him as a pivotal part of Poker Flat. After the rousing tones of FM Safari in 2005, the hit “1000 Miles”, with its hazy, hypnotising slow-burning feel, stood as a landmark work for the producer and a new benchmark in his repertoire.
Landsky additionally proved himself as a remixer of note, following 2008’s huge re-rub of D.H.S‘s “House Of God” with his rework of Pan-Pot‘s “Confronted” for mobilee, casually combining his love of deep, atmospheric techno with classic, hands-in-the-air moments. Last year he also put his special touch to John Tejada‘s well renowned hit ‘Sweat On The Walls‘ on Poker Flat. Outside of the studio, Martin regularly graces the DJ booths of world renowned clubs like Watergate and Fabric, with sets that nod to the legacy of Front Club, maintaining its deft balance of escapism and musical discovery.
The future continues to be bright for Martin Landsky. As he forges into 2011 — taking inspiration from those early days of rave within modern, finely-tuned electronics — he continues to explore the shared vision, passion, and love of music that continues to drive him and the extended mobilee team in all that they do, and all that will come.