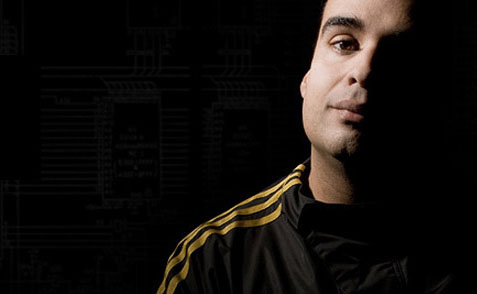 Something about John Tejada:

Normally associated with his peers in techno from Detroit, Europe and elsewhere in the US and the world, John Tejada has embraced electronic music as a personal frontier, expanding on his formidable resume as a techno recording artist as producer and remixer, DJ, and label owner. With dozens of singles, remixes, some film and TV work, and contributions to sample CDs to his credit, this recent expansion has born a slew of tracks deeply informed by his uncompromised aesthetic honed over years of diligent production which finds its roots in Detroit techno but references a far broader range of music, both in and outside of electronic music. His musically formative years were steeped in classical music, growing up in family of performing artists -- his mother a soprano singer and his father a conductor -- which then widened to include hip hop, DJing and finally, electronic music.
Known for crafting a brand of subtle, musical techno, his recorded output ranges across tempo and genre lines, from chilled out affairs with spacious arrangements to pulsating, densely layered, deeply energetic tracks that work magnificently in the hands of DJs as well as on the home stereo. Earlier on, his music found release on labels such as A13, Multiplex and Generation R&S. Following on those successes, he established his own imprint, Palette Recordings, in Los Angeles in 1996, and has enjoyed many years of steady growth and recognition. The label has served as an exclusive outlet for his own prodigious output but has recently begun to expand its roster. He has also continued to record for other labels such as Plug Research, Seventh City, Poker Flat, and others, often in collaboration with 15-year long collaborator Arian Leviste. Alongside these numerous singles, he has also produced thirteen albums (including three from his indie band, I'm Not A Gun) and four mixed CDs.