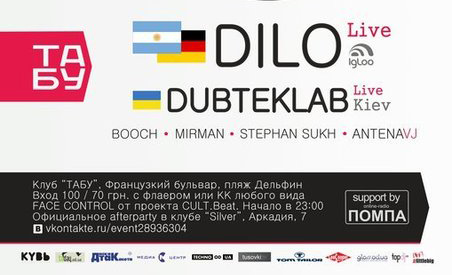 Dilo, also known as Elephant Pixel (and Franco di Lorenzo), a night active member of the rare species of very open-minded producers who connect the two distinct worlds of rock and electronics via pop, IDM and experimentation, is an utterly musical being which baffles the world of zoology as until now, some of his behavioral characteristics have yet to be explained: If you lift him out of his nest, the Igloo, and expose him to daylight, the furry fellow starts to make squealing, reverberating noises. Navigating through the dark tunnels and alleyways of its habitat, Dilo orientates himself by employing ultrasonic frequencies that bounce back and forth and thus trigger the sonic sensors that guide him.
Rooted deep in a high-rising part of Buenos Aires, and in his temporary home of choice, Berlin, two of the craziest and most vibrant music cities, Dilo is known for his eclectic and exquisite taste in audio. His productions that sound like crystalline experimental upbeat hip hop techno drones with a loopy undertone of clicky random shuffle murkiness are, quite simply put, some of the most marvelous releases around, and as part of the smooth sounding ice cream pop band Monotax he's done an incredible job to get electronic music lovers into live band formats again.
Regularly surfacing on various labels - may it be on his own imprint, Igloo Records, on which Dilo manifests himself with reduced yet very tight and heavy productions that have you gripped as hard as a drunk sailor's fist before he pulls you into a dark corner and eats your eyeballs -, he's also published music on labels as varied as Telegraph, Einmaleins, LessIzMore, Esperanza, Adjunct, Minus, Unfoundsound, Soma, We Are, Leftroom, Romanphoto, amongst others. And it does not stop there: now joining up with Los Angeles's oddball [a]pendics.shuffle, he creates yet another goofy identity for his output: Cascabel Gentz.
Dilo was remixed by artists such as Dandy Jack, (a)pendics.shuffle, Dapayk, Jay Haze, Ernesto Ferreyra, Bruno Pronsato, Franco Cinelli, From Karaoke to Stardom, Seuil, Barem, Ryan Crosson, Seph, Shadi Megallaa, Gurtz, Funzion, Tolga Fidan, Jorge Savoretti. He remixed artists like Sutekh, Camea, DissOnance, (a)pendics.shuffle, Mark Henning, Kasper & Papol, QiK, Gurtz, Funzion, etc.
His live and dj sets have been heard in Argentina, USA, Switzerland, Italy, Spain, Germany, England, Romania, Belorusia, Russia, Ukraine, Columbia, Costa Rica & Uruguay.