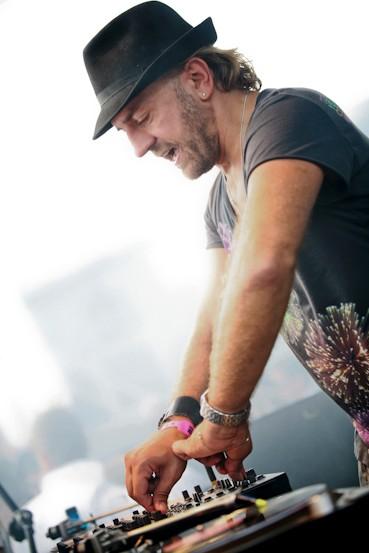 Something about Sven Vaeth:

In March 1998, Sven Väth's new record company Virgin Records releases his fourth album Fusion, a potpourri of techno, house, triphop, electro and big beat elements. The album lives up to its name: on Fusion, the typical Väth sound is updated, modernised and obviously stratified. Sven Väth starts his Fusion World Tour, playing not only all over Europe but also in Asia, America and Canada. He makes contact with various remix artists worldwide in March. He enthuses names such as Claude Young, Richard Bartz, Johannes Heil, Sensorama (aka Roman Flügel & Jörn Wuttke), Michael Mayer, Thomas Krome, Chris Liebing, Steve O'Sullivan and Buckfunk 3000 (aka Simon Begg) with his idea to remix the best tracks of the Fusion album with completely different individual styles. The results are released in mid 1998 on limited vinyl - six records, which are already much asked collector's items. The six cover sleeves of the 12-inch singles reveal an overdimensional headphone when fitted together. In 1998, Sven comes to a point where he bids farewell to a major element in his life: the legendary Omen shuts down its doors forever to the public on October 18th, 1998. Typically Sven Väth: "an ending is simultaneously a new beginning, one should never stand still". For the sake of keeping a platform for electronic music in Frankfurt alive, he initiates the Cocoon Club concept. Cocoon had already started its first events in 1996, but was stopped again, due to organisational reasons. He chooses the U 60311 club as location, where every second Friday of the month the Cocoon Club now takes place. Cocoon stands for metamorphosis, development, new birth, surprises - but as well for the spirit of a family, a community.
Artist: Sven Vaeth
Tittle: Nature One, Germany Chart (2011)
Genre: Techno - Tech House
Rls date: 10.08.2011
Source: WEB
Type: Chart