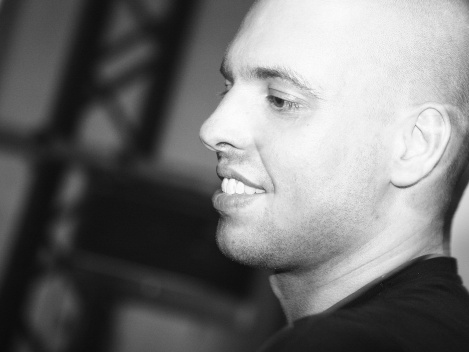 Music, work, friends and life in general is all about balance for Dutch DJ, producer and promoter Darko Esser. And more importantly finding and keeping that balance despite all the contradictions, rollercoasterrides and paradoxes life can put in front of you. It’s what binds us all like sleep, breathing and eating. No suprise that his debutalbum is dedicated to that neverending quest for balance, or as the Dutch call it: ‘Balans’. Most tracks on the album have opposing titles and the atmosphere changes from dark, moody and emotional to uplifting, cheerfull and happy. Sometimes even within the same track.
Finding balance in contradictions is also the main reason why his activities cover such a wide range and can be completely different in character. From programming the electronic music-events for the legendary Dutch venue Doornroosje to DJ-ing all over Europe back to making music in the solitude of his homestudio and selecting tracks for new releases on his Wolfskuil imprint. The difference between these activities is not entirely contradictory, because it’s all about the music at the end of the day.
As a DJ he has more then 15 years of experience in the bag and has played all over Europe in world famous clubs such as Berghain & Panoramabar, Rex, Tresor, 11, House Of God and off course his homebase Doornroosje. His sound is versatile and strongly depends on the setting and atmosphere of that particular moment. One could say that his sound is strongly settles on the crossing borders between house & techno, but don’t be surprised if he takes a sideway into broken beat, dubstep, electronics or the undiscribable.
With a discography of over 30 releases, including international clubhits like ‘Paradox’ (Underwater), ‘Catatonic’ (Ovum) and ‘The Return’ on his own Wolfskuil imprint, Darko has established a solid reputation in the producer department ever since his first records came out in 2003. His releases receive massive support from international keyplayers as diverse as Laurent Garnier, Dave Clarke, Sasha, John Digweed, Steve Bug, Francois K, Luke Slater and Len Faki. Following this succes he was asked to remix tracks from Anthony Pappa, Sharam Jey, Davide Squillace and King Roc amongst others.
In 2003 he started the label Wolfskuil Records together with his good friend LL. Nowadays he runs the label by himself and activity has been increasing over the years thanks to overwhelming support from the industry and off course an increasing input of strong demos. The evergrowing Wolfskuil family ranges from young producers who release their first record to established musician like Joris Voorn, DJ Yellow, Benny Rodrigues and Paul Brtschitsch. He is very ambitious with the label, so watch out for more artistalbums in the following years.
As a promoter he is involved in more then a 100 events each year ranging from small clubshows as programdirector for electronic music in Doornroosje and Merleyn, to programming festivals up to 15.000 capacity, like Free Your Mind in Arnhem. Music- and genrewise there are no limitions, since quality manifests itself in many different shapes and sounds.