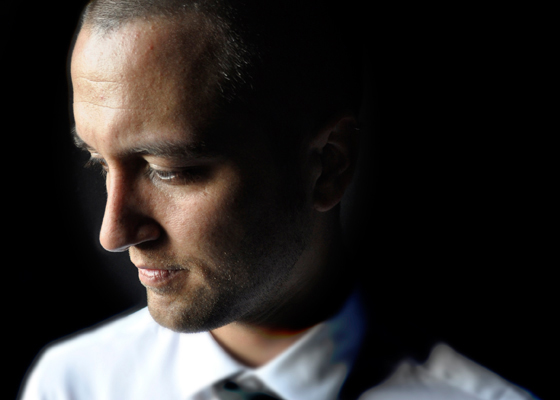 Something about Ramon Tapia:


“A lot of music has had a huge influence on my productions: I like everything from oldskool rap, Ice T/NWA, Snoop, Boards of Canada, totally freaked out stuff, everything that makes sound and moves me. I will buy and play electro, house, minimal, whatever you wanna call it, I like everything. I also love the old Latino stuff, the folk of Latin America.”
It shows: Ramon’s music indeed makes people smile - and bounce. It’s filled with the joyous exuberance of the high octane party spirit that initially inspired Ramon to get involved when he was young. It was actually down to his two elder sisters whose musical taste had a huge influence on the youngster. Returning home from the most renowned clubs of the Nineties their gleaming eyes told tales of exuberance and liberation, making Ramon aware of the power of the electronic beats. Completely fascinated by the sounds of Front 242, Frank De Wulf, Kraftwerk, A Split Second, Tyree Cooper and Kevin "Reese" Saunderson, it was only after his move to Belgium’s techno power capital Antwerp that Ramon started to buy vinyl and become involved in DJing. Working in a record shop while studying to be a gold smith, he realized that music was his life, subconsciously tracing his father’s foot steps. His dad, the only other musician in the family and whose music was provocative enough to enrage the repressive military government of his home country Chile, is possibly one of the main reasons why Ramon does not get disheartened on his way to the top. “I just want to do my own thing and play.”