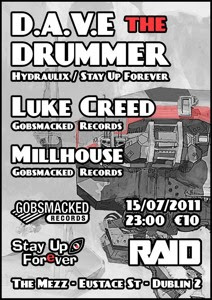 Biography of Luke Creed:
Luke Creed in a name quickly becoming ingrained in the technocracy of europe. Born in Dublin,Ireland(1988). Runner up for the best up and coming DJ in the Irish Dance Music awards at the tender age of 22. Releases on: Gobsmacked Rec(GER), Corrupt Systems(UK), Assimilation(US), Kamikaze(Kosovo), TMM(Albania), Lo-Tech(IRE) and a multitude of upcoming releases on the aforementioned and more to be confirmed..

Luke's style can be described as both dark and energising. He is becoming known for his ability to mix it up and play 40+ tracks in an hour. Creeds' releases (including "Straw Dogs", ''World Domination'', "Berlin EP" and "Dirt Frequencies") are dance floor annihilators, fusing elements of techno, industrial with hints of electro. With a year of releases on Elektrax, Corrupt Systems, Gobsmacked, TMM and an array of other labels in the pipeline, Luke is definitely one to watch for the coming years.

His DJ skills have been showcased all around Ireland and Europe. Luke has played support to techno legends such as A.Paul, Ortin Cam, Dj Boss, Sunil Sharpe, Paul Woolford and has played headline gigs all around europe.

He has featured in podcasts the world over, including the renound "Mastertraxx" podcast, Elmart, Inferno Ireland, and has had his sets and tracks aired on radio stations all around the word including Dave Clarkes White Noise, RTE Pulse, and the legendary EDM hub that is DI.FM.
Some upcoming projects include sets for Technopodcast.com, Beton Radio, and Gobsmacked Records podcast.

Recently Luke has ventured into the world of artist and repertoire with his 1st label Gobsmacked, and new Irish label Battered Records; Battered records is a project started by Lee O'Donnell and Luke is late 2010, and its first release is planned for early 2011. This label promises to bring the highest standard of techno to the masses, as with his previous ventures in the A&R department at Gobsmacked.