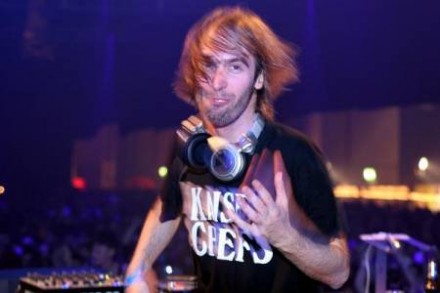 
There are loads of DJs. Sometimes far too many. Sometimes far too few truly good ones. But what is a good DJ, anyway? Especially within the club culture, good does not always mean that which people like.
But good is also certainly not something unpleasant, irritating or accentuatedly contrary. So, perhaps a good DJ is one that brings both together. One who plays music - or designs a night - in such a way, that his performance has „pleased” everybody, that the music induced joy and euphoria, and which perhaps was even inspiring for all of those present. Nevertheless, such a good set has blemishes, small shock effects, unusual tracks, absurdities. By making a game of these infractions of the rules a good DJ creates his own style, his signature. And the longer and more tenaciously he does that, the better he will be able to master it.The person in question in named Karotte, „DJ Karotte”. And it’s up to you to decide whether he is a good DJ. However, after working so passionately at this job for over fifteen years, it is highly probable that he has come very close to reaching his goal. Success isn’t always right, but it is often used as evidence in support of this thesis. DJ Karotte was already contributing to the rise of House and Techno in the German clubs during the pioneer days of the early ‘90s. As resident in the coolest clubs in the German state of Saarland, „Mirage”, „Schwimmschiff” or „Flash”, he not only gained his skills, but also a lot of respect from his audiences and colleagues. Pierre from Kassel’s „Stammheim” / „Aufschwung Ost”, for example, was one of those so impressed with Karotte’s unique and fresh style, that he invited him to his home base. The blossoming of a great love, so to speak, because since 1996 Karotte has himself become a resident at the renowned Techno-House club, finding there, as well as at Frankfurt’s fulminant „U 60311”, something like a home away from home.One thing led to another, and now DJ Karotte can look back on an impressive agenda of important clubs and events. EDK in Hamburg, Park Cafe in Wiesbaden, Mach 1 in Nürnberg, London’s Ministry of Sound, Space on Ibiza, just to name a few.At 30 years of age and with fifteen years of DJ experience, DJ Karotte uses his own unique mixture of House and Techno, dramatic, innovative, sometimes funny, always extremely exciting and unusual, to conquer the hearts and minds of people in clubs around the world. And there is still so much to do. No end in sight....