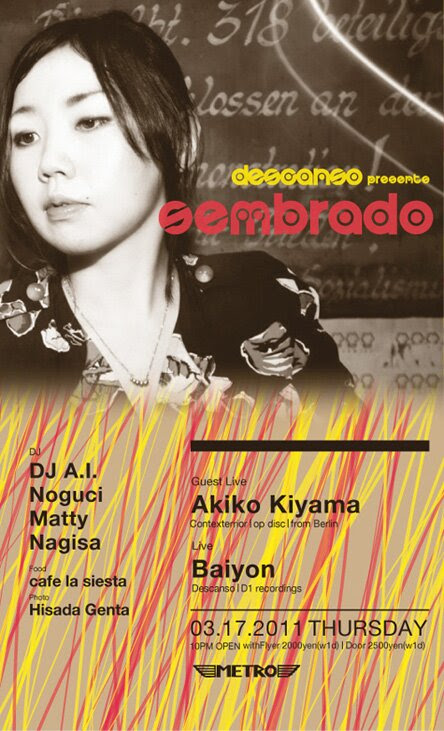 Biography of Akiko Kiyama:
Akiko Kiyama was born in Tokyo,JAPAN, the artist based in Berlin,Germany since 2007. She is the first female techno,minimal producer in Japan.
Since her youth,she was surrounded by classic music education and had been playing piano for 20 years.And she also started playing electronic guitar when she was 12 years old.Through the experience of guitar , she found the other possibilities from classic music and got more interested in the sounds expanded by electricity. At the age of 14, she happened to listen to Drum'nBass on the radio show that made her turn toward club music.To pursue , to evolve and to have more music experiences , she decided to create her own tracks in 2002.The music career has started since 2004 since her debut EP " Dimension" on Sud Electronic(London) which got great reviews by top world class DJ & Musicians like Mad Mike,Richie Hawtin , Sven Vath, Ricardo Villalobos.And in November 2005, her track " Like Ancient" has been licensed by M-NUS records ,and is appeared on DE9 Transitions by Richie Hawtin.In 2007, She moved to Berlin to follow through with her commitment to dance music and to develop her style further. She also released several singles on reputable labels such as Contexterrior, Lick My Deck, etc and her first album "7years" came out on District of Corruption under Kompakt.Since then she has been playing in Europe, North & South America and Japan widely, including her main acts at Fabric London and Panorama bar Berlin